Shinto Muso-ryu is a well structured and comprehensive martial system of Sword and Staff use. And though the sheer number of kata can appear daunting, in reality the groups of kata develop a student in a step-wise progression of techniques and combative strategies.

These groups of kata mesh like fine gears in a way that is astounding! SMR has not remained static over the years, these kata we study today are the result of literally hundreds of years of refinement and growth by the military police of the Kuroda in Kyushu, Japan. All traditional SMR kata are done in pairs (Sword vs. Staff – Uchidachi vs. Shijo), there are few solo exercises and no solo kata.

Regarding swordsmanship (Kenjutsu), it should be clear to even the casual observer that a high level of skill with the sword is necessary to produce a skilled jojutsu exponent.

The reality is that the kenjutsu studied and used within Shinto Muso ryu is rich, effective, and copious. Students spend almost the same amount of training time with the sword as they do with the Jo, and as time goes by the more experienced students will spend even more time learning to effectively use the sword.

These Kihon and Kata were created by Shimizu Takaji, along with Otofuji Ichizo and a committee of Kendo Association representatives in the 1950’s & 60s. Shimizu Takaji, through his instructing of the Tokyo Police, recognized the need for a method of teaching Jodo that accommodated much larger class sizes than are found in traditional Shinto Muso Ryu dojo. Where small groups of students receiving one-one-one instruction is the norm.

Both the basic techniques and forms are drawn primarily from the koryu martial art of Shinto Muso-ryu, and are strictly speaking, not part of traditional Shinto Muso Ryu Jo kata.

These kata were chosen from the three first series of SMR: Omote, chudan and Ran’ Ai as they were seen to best represent the art. Ten of these kata were taken from the existing SMR kata but with minor modifications as to better suit the requirements of the Kendo Federation.

These modifications often involve timing, distances, targets, and overall movements to make the kata a bit safer. And to reflect the Kendo predisposition for ‘squared’ postures and body alignment, and relatively taller stances.

The two other kata was created specifically for the new Seitei Jodo system (Suigetsu & Shamen) and was not part of the original SMR-system. Seitei Jodo is today taught as a part of the Zen Nihon Kendo Renmei (All Japan Kendo Federation).

Today thousands of people study Seitei Jodo and engage in kata competitions organized by the overarching Kendo Federation (ZNKR), and may earn black belt ranks (up to Hachidan / 8th dan). This is one of the largest differences between traditional Shinto Muso Ryu Jo and Seitei Jodo. Some SMR dojo participate in the Kendo Federation examinations and competition, in addition to the traditional SMR kata study.

Traditional SMR has no competitions or black belt rankings. But many traditional SMR dojo use the Kihon and Seitei Kata as a way to introduce the Jo/Sword fundamentals to new students.

The Shobukan Dojo does use Kihon and Seitei Kata for training purposes, but does not participate in the ZNKR examinations or competitions.

This is the first set of actual kata in Shinto Muso Ryu. It should be considered a tool for teaching the fundamentals (these existed before Kihon & Seitei Kata). Shimizu Takaji said these kata should be used to develop proper body movement, coordination/manipulation, and effective operation of the Jo. Timing of movements are not fast, but regular and measured with an even tempo. Keep in mind that in years past a student might reach Kage or Samidare before learning the Sword side of each kata.

The second set of SMR kata, Chudan seeks to take what a student has learned in Omote and build upon this with increased speed and fluidity. Time to get out of the comfort zone and challenge the ability to perform the basic movements under more dynamic conditions. This can feel/look a bit rushed, and it might be. But with this comes the potential to expose more weakness in Jo technique. Then identify those weaknesses and rectify them.

This set of kata is not found in the traditional SMR scrolls conferred to students who have earned them. But it appears to have been developed in the Bakumatsu era (1850-1867)[2]. It incorporates and synthesizes techniques from Omote and Chudan in a long, dynamic set of movements. Performed with both the long and short swords.

This set of kata follows the same names as in Omote. The emphasis here is Accuracy. And a palpable increase in the use of zanshin, while maintaining a calmness of motion despite the changing flow of fast and slow.

This set of kata emphasizes a moving Hiki Otoshi strike, and other preemptive striking by the Jo. Continue to further develop zanshin.

Developed by Shimizu Takaji around 1940, it is not a part of the traditional SMR kata. But seems to be practiced by most SMR groups today. It is said that Shimizu Takaji felt this set was ‘not quite finished’. Thus you may see some variations between different SMR groups, but fundamentally these kata are  the same. It is said this group of kata is a synthesis of Omote/Chudan/Ran’ Ai/Kage. [2]

An advanced set of traditional kata, this is the last set before the Gokui Hiden. Emphasis is on kiai, zanshin, and overall breath control. The order of kata may be different depending on the SMR group.

These represent the last and secret forms of Shinto Muso Ryu and are taught only to Menkyo Kaiden.

Heiden Bujutsu 併伝武術 (associated martial arts that are carried along with…. sometimes referred to as:

Over time Shinto Muso Ryu incorporated other weapon systems into the overall curriculum. Driven mostly by the Kuroda Military Police, these other weapon systems were included in a way that reflected movements and principles found in SMR core kata. These groups of kata are taught to students gradually, after they have reached a certain level of proficiency in the primary SMR Jo kata.

A Japanese sword, through Kenjutsu, is the primary weapon used against a person wielding a Jo. Thus its emphasis is paramount. The reality is that Kenjutsu skills are taught all through the regular SMR curriculum. It is said that ‘a strong swordsman will help build a good Jo exponent’. Also, Kenjutsu  is the only Fuzoku Ryuha actually listed in the SMR mokuroku.  *Some SMR groups use ‘Ai Sun’ instead of ‘Ai Suri’*. 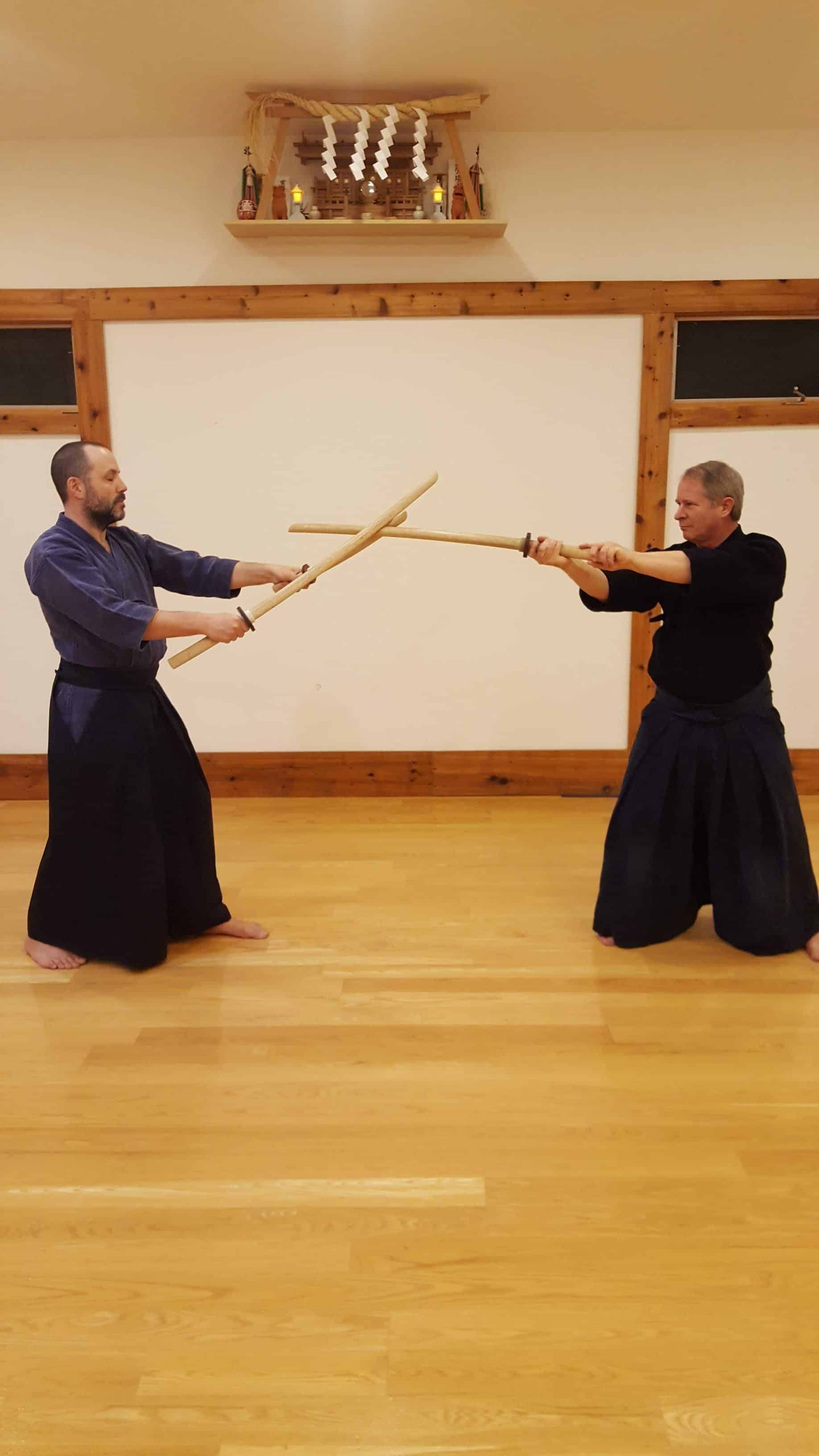 The Tanjo is a walking staff/cane-length weapon. A relatively new addition to the overall SMR curriculum is, of course, based on the movements of the longer Jo. Uchida Ryogoro incorporated these European cane techniques into SMR sometime around 1885.  [5] 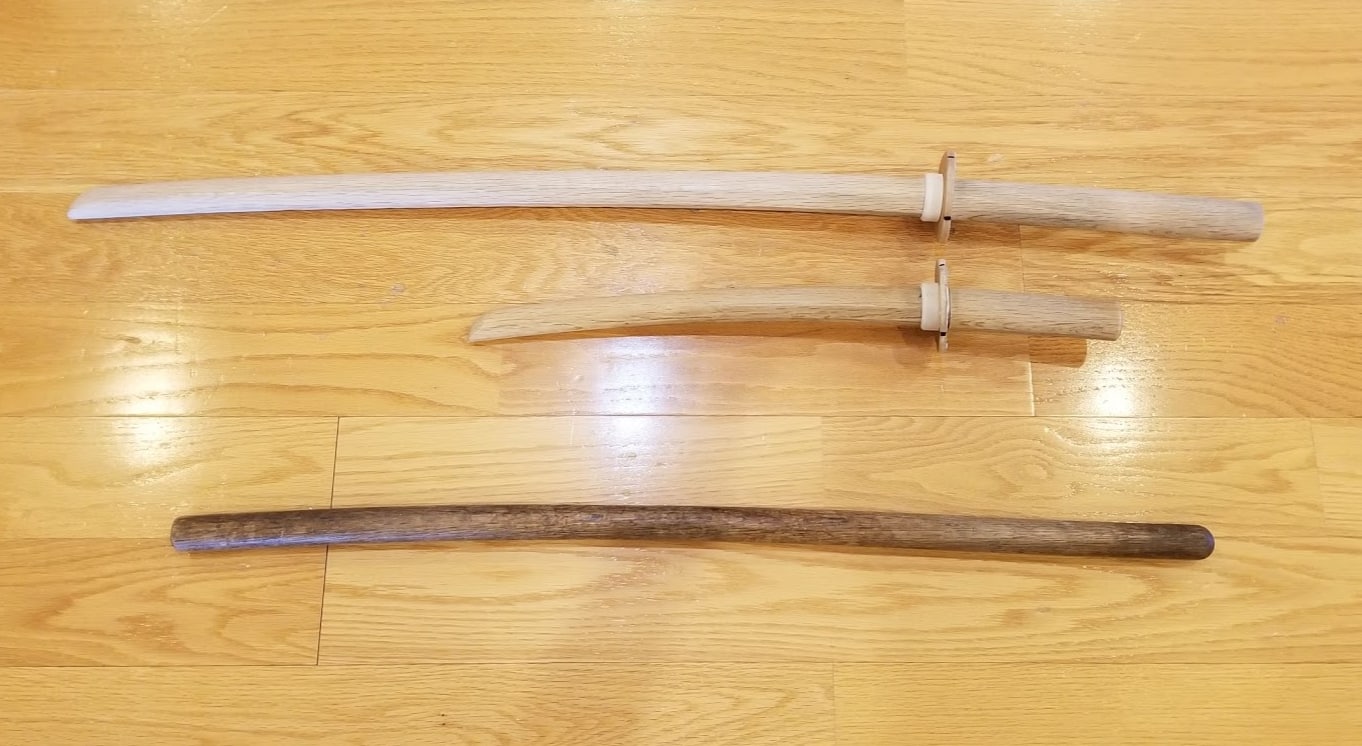 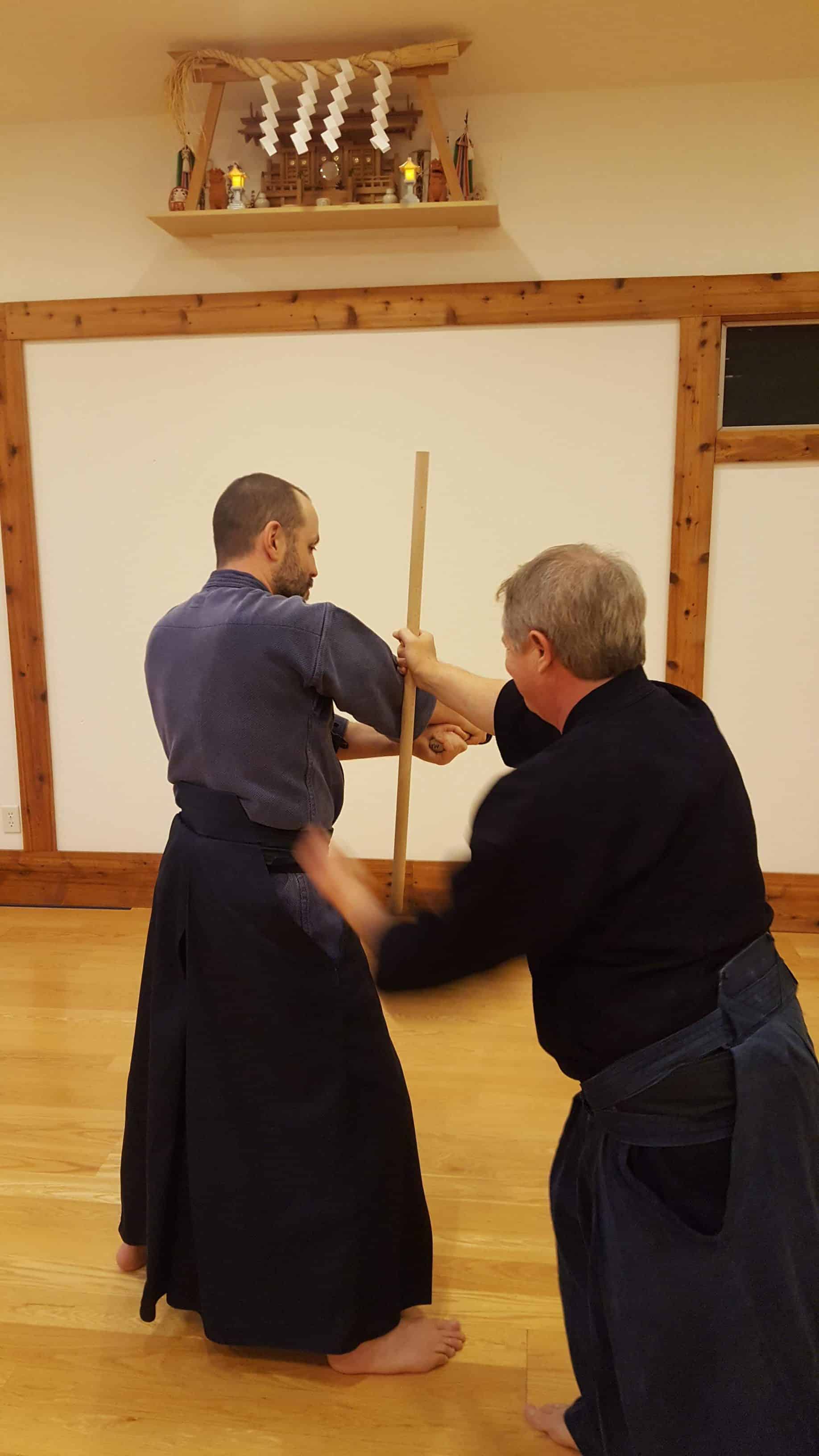 The Kusarigama is sickle and chain weapon thought to have been incorporated into SMR during the 17th century. It is effective as a ‘distance’ weapon. A practical weapon for use in open areas, Kuroda Police found value and utility in this tool for law enforcement. Originally a double-edged blade, wooden handle with metal hand-guard, and a weighted chain. Today a wooden weapon and hemp rope/leather bag(fundo) is used for training.  Training is divided into three sets of kata: Omote, Ura, Okuden. [6]. 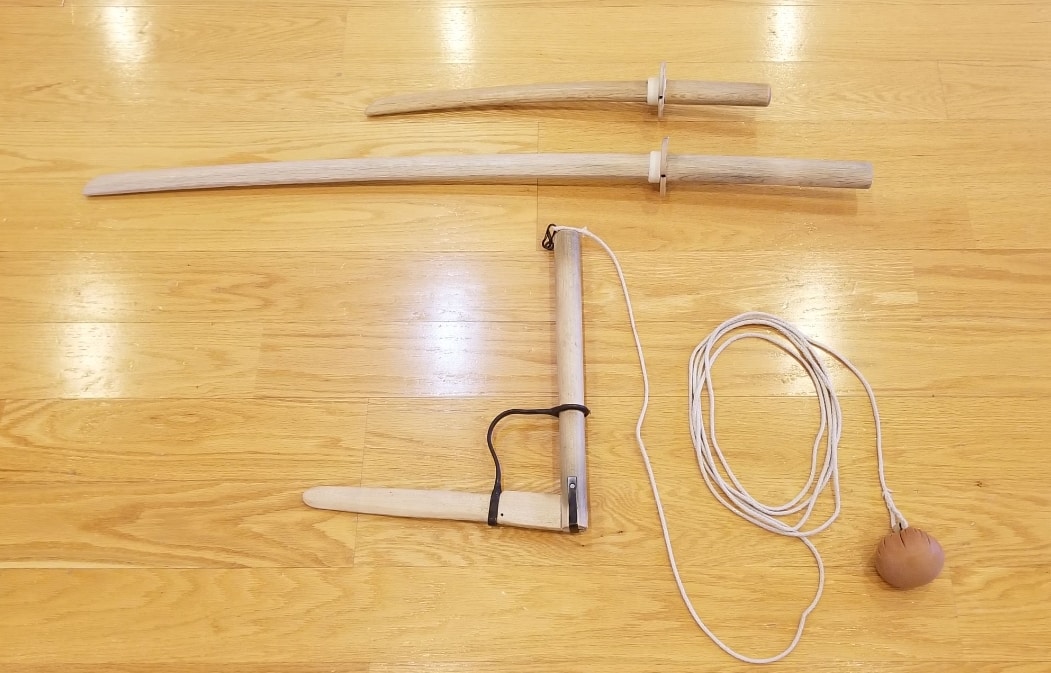 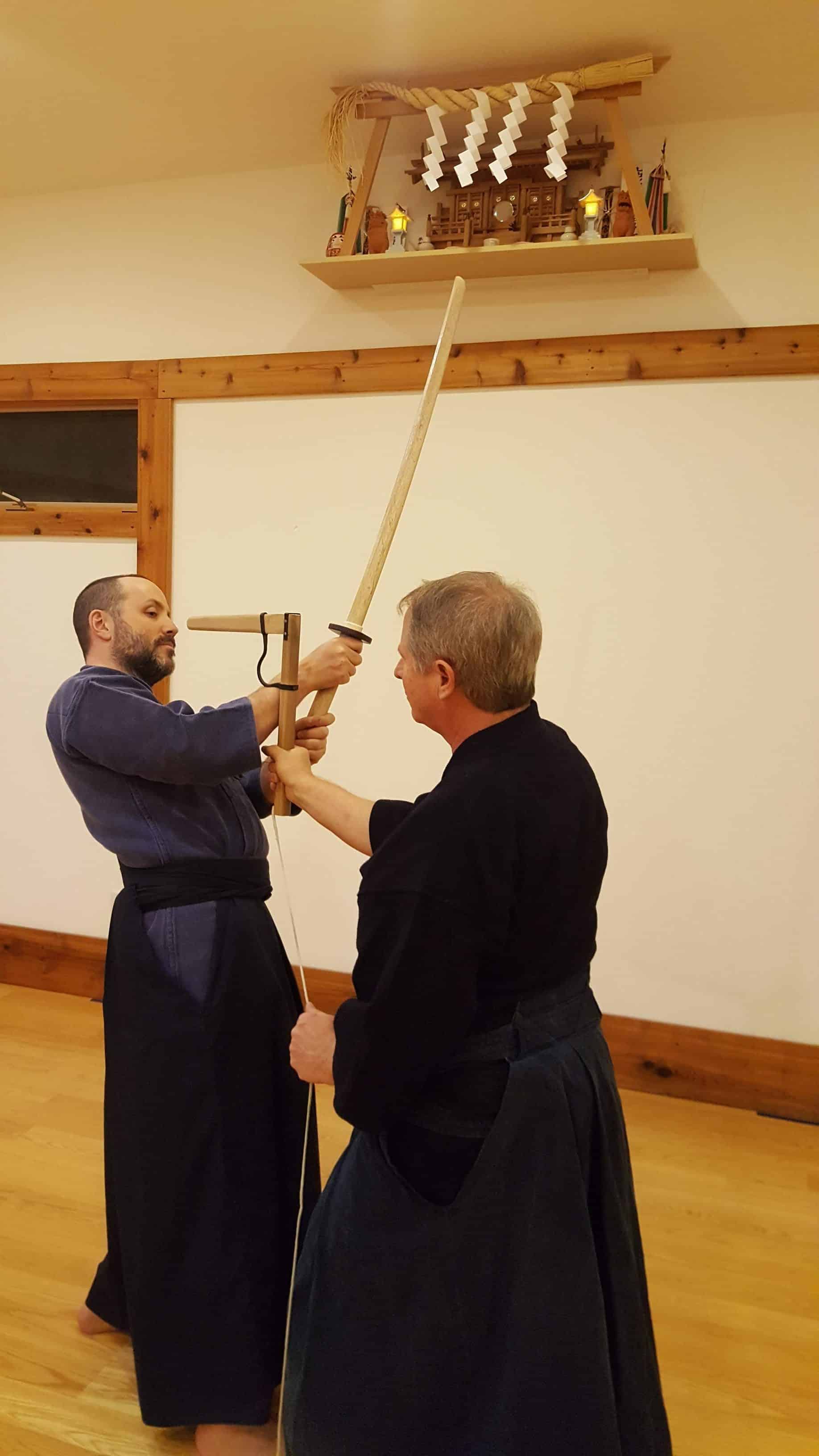 The (jutte) is a baton made of iron with a small tine or prong fitted just above the handle. The gripspace of the handle is wrapped with a cord that hangs down from underneath the handle with a tassle at the end. The jutte was mainly used by police-forces of the Edo-period of Japan and is known to have had over 200 variations.[4]

A typical tessen of the Edo-period (1603-1868). This weapon is used in tandem with the jutte in some forms of Ikkaku-ryu
Ikkaku-ryu fields a truncheon about 45 cm in length with a weight of about 550 grams.[4] It has a smooth shaft ending in a handle wrapped in a coloured cord ending with a hanging tassel. A small tine is attached just above the grip. Originally the colour of the wrapping-cord indicated the social level of the wielder.[4] The original design of the Ikkaku-ryu jutte had a hexagonal shaft cross-section with the tine attached to one of the corners instead of the flat surface.[4] The inside of the tine was also sharpened which enabled the wielder to use it for cutting if applicable.[4]

The fan (tessen) used in Ikkaku-ryu is about 30 cm in length.[4] The fan was designed to look like a regular folding-fan carried by samurai and other nobles in the samurai-era when they did not have access to their swords.[4] These special tessens were in some cases either made totally of iron or had iron-edges thus enabling it to be a small self-defence weapon if required.

The modern Ikkaku-ryu system fields 24 training-forms (kata) divided between 2 series called Omote and Ura. Some of the kata uses a war fan (Tessen)[4] in tandem with the jutte. The forms of the Omote and Ura-series share the same name but are different in application. [7] 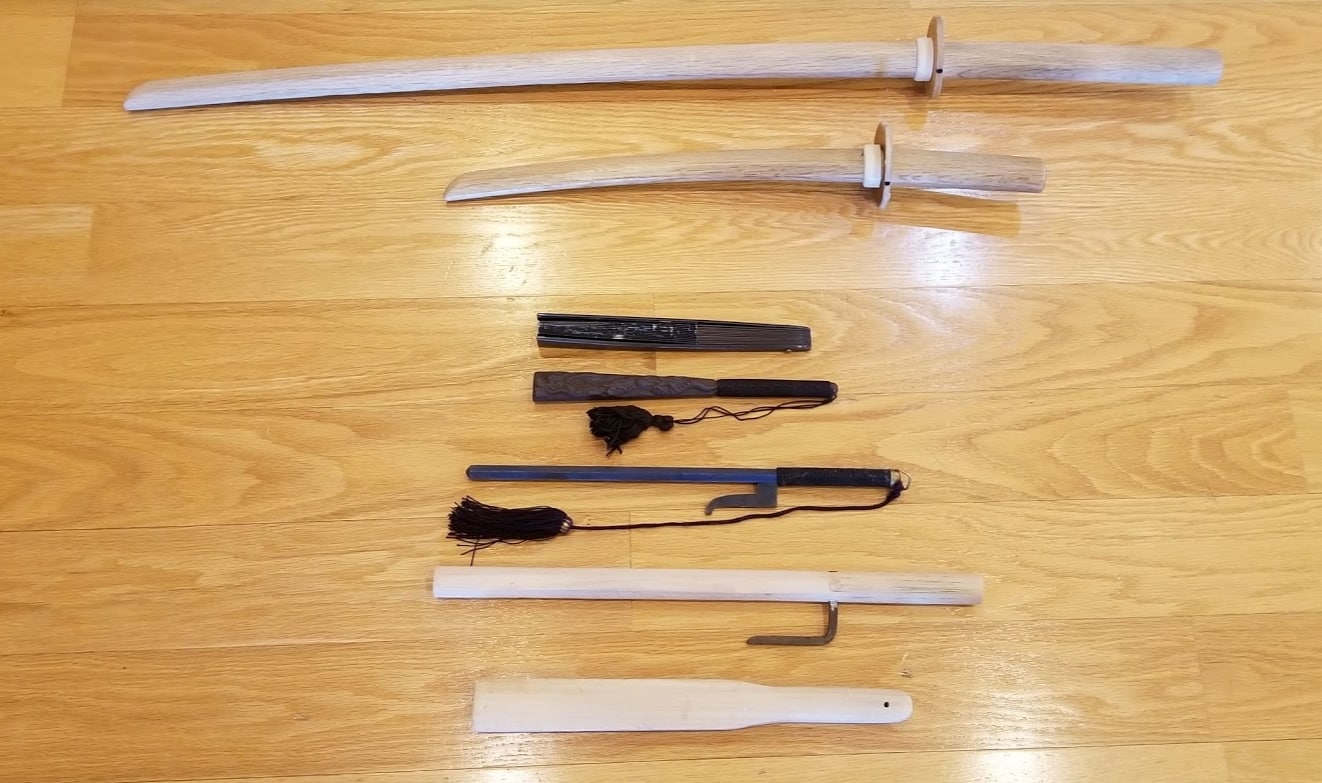 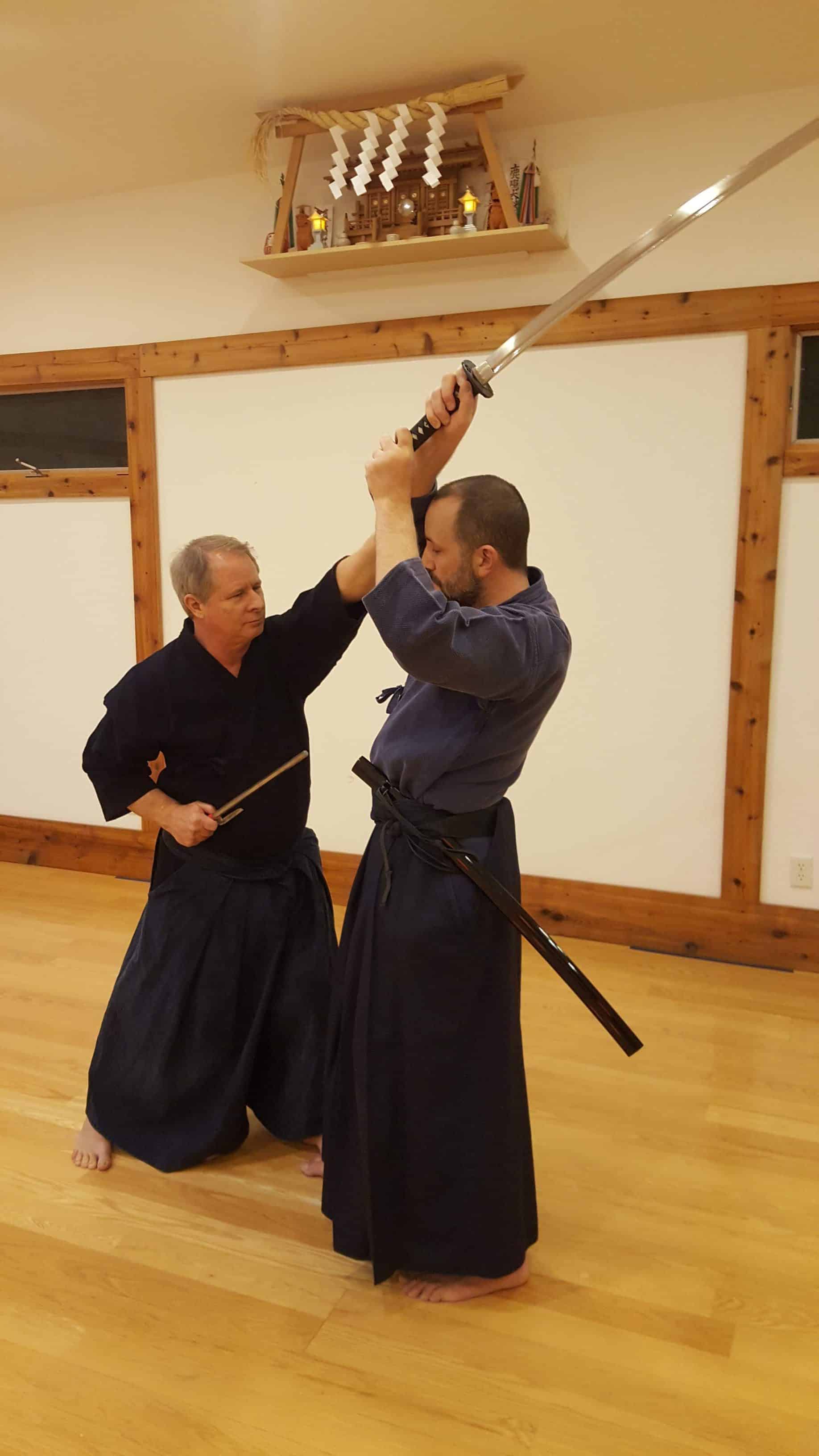